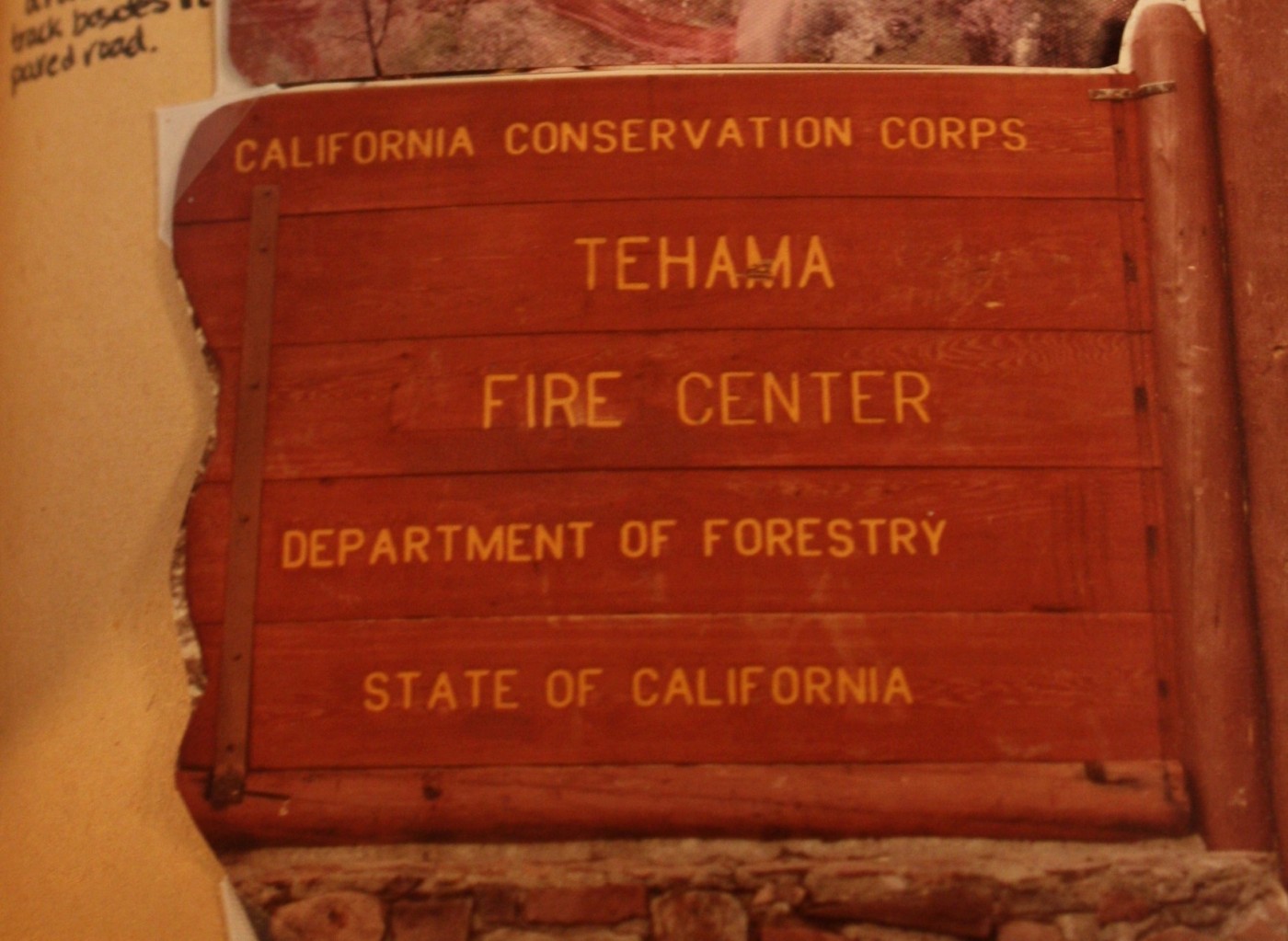 Today on CCC: Hard Corps, we get to see a little more of the vision that I have for the blog and podcast. I intend to explore all aspects of the CCC program, throughout its 40+ year history. I want to cover every center and every program that I can find Corpsmembers from.

Also included in today’s podcast are interviews with two Backcountry corpsmembers at last year’s debriefing at Camp Mather, California. Today we will be hearing from

This is how we can get your story told on CCC: Hard Corps. Just talk to me! Because every Corpsmember has a story that deserves to be told.

You can email me at george@ccchardcorps.com ,

Or you can send me a Facebook message through CCC: Hard Corps .

The California Conservation Corps started in 1976 with a lot of enthusiasm and high ideals, but nobody really knew how long it would be around. It was not even a permanent program in 1976. Funding had to be renewed every year by the California legislature. It was started on a shoestring budget. Equipment was transferred from the Ecology Corps, which the CCC had replaced. The CCC lived in borrowed facilities.  Centers that were residential programs moved into underutilized state buildings that could accommodate the housing, kitchen, workshop, and administrative program needs. Several of them set up on State Hospital grounds in places such as Stockton, Camarillo, and Santa Clara. Some of them set up in unused Army personnel housing on obsolete Nike missile bases, such as Bollinger Canyon (outside of San Ramon) and Oat Mountain (outside of Chatsworth).

The CCC also formed a partnership with the California Department of Forestry, commonly known as CDF (now called CalFire in 2019). Several centers were set up that were known as Fire Centers. The crews from these centers were all Corpsmembers of the CCC, the centers were administered by the CCC, but the crews were led by CDF Captains instead of CCC Conservationist 1s, or crew supervisors. For the most part, these centers moved onto already existing CDF facilities that had already been operating Department of Corrections inmate fire crews. The inmates moved out, and the CCC moved in. Some of the Fire Centers were outside of Magalia (Butte), Angels Camp (Calaveras), Klamath (Del Norte), and Weott (Humboldt).

Today we are talking about the Tehama Fire Center.

I had a chance to speak with three former Corpsmembers who were gracious enough to share their CCC memories of Tehama: Karen Brown Wilson, Penelope Johnstone, and John Leonard. Karen, Penelope, and John were all at Tehama around the same time, about the time it closed in 1981.

Tehama Fire Center was located outside of the tiny town of Paynes Creek, about twenty-five miles east of Red Bluff. It was adjacent to the Tehama Wildlife Area, a wide open space in the rolling foothills of Lassen Peak. The area has cool, wet winters, and notoriously hot, dry summers. Summer temperatures can typically top 110°F.

A person could have found their way into the CCC and Tehama Fire Center by all sorts of routes.

Karen Wilson Brown joined the C’s in the summer of 1980 from San Diego after seeing a recruiting advertisement in her high school newspaper. The ad said something to the effect of ‘Want adventure? Work outdoors and earn $500.’ Karen joined after high school and went to the Bret Harte Academy. She was randomly assigned to Tehama after the Academy.

Penelope Johnstone was staying at a youth hostel in Sacramento in the early summer of 1981 and needed a job. A CCC recruiter came to the hostel and hired many of the people there who needed jobs. Half of these people, including Penelope, were sent to the Academy, while half were sent directly to centers that needed people immediately.

John Leonard was attending Sacramento City College in the spring of 1981 and decided that he wanted to be a firefighter. He joined the C’s and was sent directly to Tehama Fire Center without going to the Academy first. 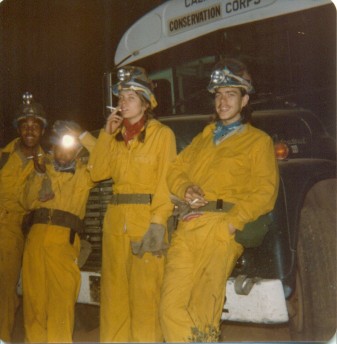 Since Tehama’s primary purpose was fire fighting, every one of the crews at the center was a CDF-certified hand crew. Their job was going to be digging fire line with hand tools like shovels, Pulaskis, and McCleods, through any sort of terrain. Training typically consisted of 16 hours of fire training at the Bret Harte Academy included in the basic training program there, and supplemented with another 16 hours upon arrival to Tehama. Corpsmembers at Tehama were proud that they could roll out on any fire within ten minutes of receiving a call.

Penelope had a surprise during fire training. The yellow firefighters suits were made out of a special flame retardant material called Nomex. It turned out that Penelope was allergic to Nomex. Her firefighting days were over before they started. Penelope was reassigned to the kitchen.

Depending upon how many Corpsmembers were assigned to TFC, the center housed from two to four crews of around twelve to fifteen people per crew. There were dorm, kitchen, and laundry facilities. A cook staff cooked breakfast and dinner for the Corpsmembers. Every weekday morning, sack lunch fixings were put out for Corpsmembers to build their own lunches to take to work.

The typical work day at Tehama started like many others in the CCC: early morning PT, breakfast, and roll out to work. When not fighting fires, crews worked on all sorts of forestry related projects in Shasta and Tehama Counties. They climbed tall pine trees to collect cones for seeds in Lassen National Forest and the LaTour Demonstration Forest. They cleared fire breaks, and thinned underbrush in forests to reduce fire hazard. These types of projects gave the Corpsmembers plenty of experience on the chain saws they would need to clear fire line. They also worked some steam clearance projects.

Tehama crews were sent in response to the Mediterranean fruit fly emergency in 1981. They had to strip infected fruit from the trees and dispose of it. They were away from the center for two weeks on that emergency response.

The first crew vehicles at Tehama were old school buses that came from the Ecology Corps. They were painted dark forest green, and at first still had ‘Ecology Corps’ stenciled in white on the sides. ‘Ecology Corps’ was eventually replaced with ‘Tehama Fire Center.’ The buses were eventually replaced with CDF-style Crew Carrying Vehicles, or CCVs. These vehicles were specifically designed to carry fire fighting crews. The first CCVs were also dark forest green.

Corpsmembers who did not have a high school diploma were required to take GED classes in the evenings. Corpsmembers who did have diplomas were pretty much on their own after work hours. The Corpsmember Development Programs that were later to become a key part of the CCC program had not been developed yet. Sometimes an intern from a state university like Chico would come out and try to establish some sort of recreation program, but the programs never lasted long and had limited success. Corpsmembers were sometimes able to earn college credits for some of the work activities they did. For instance, Karen earned one credit for certifying with the chainsaw.

Without much structure during off-duty hours, and being energetic young adults twenty-five miles from town, and transportation to town being an issue,  Corpsmembers tended to do what unsupervised young people did back in the 1970s. One former Corpsmember I spoke with said, “Do you remember the movie, M*A*S*H? The movie, not the TV show. Well, it was just like that.”

And that’s all we’ll say about that.

Well, almost all. I think that a Corpsmember’s experiences with that sort of extracurricular activity probably depended upon the person. Some Corpsmembers that were at Del Norte with me in 1986 have memories of some pretty wild stuff. I don’t, because I was more likely to be reading books or hiking on the coastal trail than going to parties. I think the same can be said for every generation of Corpsmember. Some will have wild stories. Other won’t.

Some Corpsmembers from Tehama Fire Center:

All good things come to an end, and the CCC ended it’s program at the Tehama Fire Center in 1981.

Karen spent the summer of 1981 in the Backcountry Trails Program on the Kings Canyon crew. When she returned after the season in October, the Tehama Fire Center was one month away from closing. She helped close the center, and then helped to transfer the Academy from Brett Harte to the Fricot City location it would occupy for five years. Karen finished her time in the CCC at the Calaveras Fire Center. After the CCC, Karen joined the Air Force as a journalist.

Penelope was working towards her Cook Specialist green hat when the center closed. She transferred to the Solar Center at Greenwood where she earned her green hat. Penelope went on to a great career cooking with the CCC. She was a Cook C1 at the Fricot City Academy when I went through in late summer, 1986. She fed hundreds of Corpsmembers over the years on fire and flood emergencies.

John worked his summer of fires. When Tehama closed, he transferred to Butte Fire Center in Magalia. He remembers Butte as being more structured than Tehama had been.  He followed his season of fire with a summer on a Backcountry Trail Crew in Yosemite the following year. After the C’s, John finished his forestry degree, and then served a term with the Peace Corps in Ecuador. Then he began a long career with the US Forest Service.

Tehama Fire Center photographs were provided by Penelope Johnstone and Karen Brown Wilson. Thanks also to Gillian McCallum, Mike Smith, and John Martinez for contributing to the story.

I actually spoke with Karen, Penelope, and John a few years ago about their time at Tehama. My apologies to them for taking entirely too long with this story. In my defense, every time I felt that it was ready, I’d learn something new about Tehama, or get pictures, or think of new questions that I felt that I needed to get answered first. I finally just said, “Okay, this is it. Post what I have, and go from there.”

Some of my unanswered questions about Tehama Fire Center:

If you are reading this blog, and you were ever associated with the CCC at Tehama Fire Center, I want to hear your story! I would love to follow up with more stories. You can contact me via:

Or you can send me a Facebook message through CCC: Hard Corps .